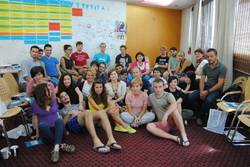 A group photo of the seminar participants
26 August 2013
From 19th until the 25th of August in Sarajevo, Bosnia and Herzegovina, the BABELNOR network held its first capacity building seminar. More than 30 LGBTI and queer activists from the Balkans, Belarus, Ukraine and Nordic countries took part in it. The main objectives of this seminar were to encourage and empower young LGBTI and queer activists through non-formal education, interactive participation and providing an expert knowledge, and the outcome of this seminar were outlined strategies at personal, activist level, and on organizational, network level, as well as developed initiative for a BABELNOR campaign. The seminar's five-days programme covered topics from organisational development, norm criticism, law and advocacy, strategies and planning, and social activities outside of the official programme which included visit of civic organisations in Sarajevo that are working with LGBTI and queer people, and projection of the movie from the First Pride Parade in Split, Croatia.

The seminar was financially supported by the Royal Norwegian embassy in Bosnia and Herzegovina and by the Norwegian Youth and Children Council, and host organisation of the seminar was Sarajevo Open Centre. Subversive Front took an important part at the seminar with Antonio Mihajlov (as a member of the organising team of the seminar) and Blagorodna Apostolovska (as a delegate). In addition, some of the trainers at the seminar were Irena Cvetkovikj (Project coordinator at the Coalition "Sexual and health rights of the marginilised communities") and Biljana Ginova (Financial director at the Macedonian Helsinki Committee for Human Rights), and as LGBTI activists, active contribution was shown from the H.E.R.A. activist, Despina Dimitrova and Ljubomir Faizov from the LGBTI Support Centre.