Celebration of IDAHOT 2014 in Macedonia 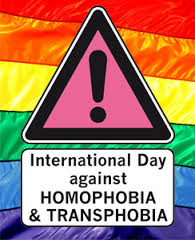 In Macedonia, this year’s International Day Against Homophobia and Transphobia was celebrated with a several-days programme including the main outdoor event “Together against homophobia and transphobia”, held on Sunday, 18th May.

IDAHOT celebration started on Saturday, 17th May, with the full-day’s event of Creative Youth Action – “Who is afraid of the evil silence?” at the Home of the Army, where several organisations and activists through different artistic performances (creative writing, photography, film, dance performance and theater) showed that youth’s critical voice should not and cannot be stopped. Some of the performers at this event were the LezFem (lesbian-feminist group) and “Subversive Front” whose members had a dance performance titled “Elegy of pain”.

Then, on the same day, at 17:00, the LGBTI Support Centre hosted a public debate “Hate crimes against LGBTI” where three speakers including Zarko Trajanoski – expert on human rights of LGBTI from the Coalition “Sexual and health rights of marginalized communities”, Neda Chalovska – legal adviser at the Macedonian Helsinki Committee of Human Rights, and Aco Kabranov – prominent journalist and chief editor at the news portal Libertas, discussed the tackling of the problem of violence against the LGBTI people, through the legal and societal implication of (mis)protection of the LGBTI people from violence.

The LGBTI Support Centre was also the place where on the same day – 17th May, at 20:00, was promoted the Intervention Fund through which first aid will be provided to members of the LGBTI community related to needs of medical intervention, care and/or treatment, needs of legal intervention, aid and advocacy, and needs for “shelter” intervention (for LGBTI victims of domestic harassment, discrimination and/or violence). At the same occasion, certificates of acknowledgement and appreciation were given to the participants of the campaign “Macedonia has love for all”.  Last but not least, at the same event, an exhibition of photographs of famous Macedonian artists was opened, as well.

The main event of celebrating IDAHOT was the open-air event “Together against homophobia and transphobia”at Shkolka in Gradski park (City Park) in Skopje, the next day, on Sunday, 18th May, from 12:00 to 16:00. For the first time, the city authorities allowed a public space to be used as the venue of IDAHOT celebration in Macedonia, which makes this IDAHOT 2014 a historical one. This year, IDAHOT was dedicated to the fight against discrimination on the grounds of sexual orientation and gender identity, as one of the chief political needs of the LGBTI community, through amendments of Article 3 in the Law on protection and prevention from discrimination. Symbolically titled “Initiative Article 3: Support and solidarity for the LGBTI community”, the event gathered dozens of visitors that were able to be part of a 4-hours programme, that included speeches of famous LGBTI supporters – participants at the public campaign “Say NO to homophobia and transphobia”, signing cards with a message of encouragement of the Macedonian MEPs to address the amendments in the anti-discrimination law, and DJ sets of three popular Macedonian DJs.

On Monday, 19th May, at 14:00 at the LGBTI Support Centre a public debate titled “Homophobia/Migration/Workers’ rights – German and Macedonian experiences” was held, where a former member of the German Bundestag, Lale Akgün, and a member of the Macedonian firemen’s  trade union, Zlatko Perijoski, shared their experiences in connecting the civic sector with the trade unions and the state institutions in the combat for the human rights of the LGBTI people.

Last, but not least, on Wednesday, 21st May, at 19:00 at the GEM club, was held a round-table “Legal change of sex” where Natasha Boshkova, legal adviser at the Coalition “Sexual and health rights of marginalized communities” and Igor Raiden – coordinator of the group of transgender people within the LGBTI Support Centre, discussed the challenges trans people in Macedonia face due to the vacuum in recognition of gender identity in Macedonian legislation, and the possible solutions to them.