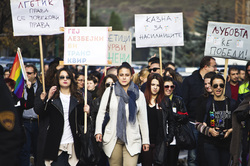 From the March of tolerance
18.11.2013
On November 16th 2013, in front of the office of the Government of Republic of Macedonia, was held the fifth March of Tolerance. The march was organised by the Helsinki committee for human rights in Republic of Macedonia and LGBTI Support Center. In the realization of the march joined: H.E.R.A association for health education and research; Coalition “Sexual and health rights for the marginalized communities”; Subverziven front – association for critical approach toward gender and sexuality; Tiiiit! Inc, women movement; STAR – STAR, civil initiative for promotion and improving the rights of the sexual workers, Terra Floria, association for environment protection; Parkobrani; Square Freedom, National network against women violence and family violence; HOPS – alternatives for health living; Anima mundi, association for animal protection; National Roma center, Civil, center for freedom, and Youth educational forum – MOF.
Under the slogan “Macedonia has love for everyone – the violence will not begin, neither end with me! ”, this march was on the occasion of the International day of tolerance and was dedicated to the human right of living life without violence. More than 150 citizens headed the route starting at the Government of RM office, to the street “Macedonia”, the square “Macedonia”, Stone bridge, stopping at the plateau before the “Stokovna kukja Most”, calling for stopping the violence, which is becoming every day practice in the Macedonian society.
The representatives of the civil associations – the organizers of the march made an appeal to the state institutions, to sanction all the acts of violence, especially the violence over the marginalized, excluded and vulnerable social groups, as the major victims of violence.
In that direction, in the past year, the number of violence acts over the LGBTI people was noticeably increased. This is due to increased number of topics discussed in public for the LGBTI rights. On the last year March of tolerance, there were two activist victims of violence act. The LGBTI center for support was attacked several times upon its establishment in October 2012. Also, the house of a young actor was stoned; after he pronounces that he is homosexual. There was family violence motivated of homophobia, and the homophobia hate speech was often present in the public especially in the social Medias.
In Macedonia, the law “for protection and prevention of discrimination” does not include the sexual orientation and gender identity. The Criminal law does not recognize any crimes motivated by homophobia and transphobia. Also, the hate speech based on sexual orientation and gender identity is not legally sanctioned. One of the many cases that prove the absence of law sanction for the crimes motivated by homophobia and transphobia was the beaten youngsters at the “Kontra – gay Parade” held in June, 2013. These acts give opportunity to violence to take wider dimension.
In the same time, the absence of explicit condemnation for the homophobia crimes from the political leadership, in combination with increased homophobia rhetoric in the public and the evident homophobia present in the educational system, can only legitimate the violence over the LGBT people.
The March of Tolerance is one of the rare types of protests, where excluded, marginalized and vulnerable social groups can be united to the call for tolerance and respecting the differences.