Meeting at the European Economic and Social Committee 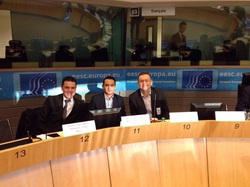 From the meeting at the EESC.
04.12.2013
On December 3th, 2013 at the office of the European Economic and Social committee was held the 31th meeting of the Contact group for Western Balkans. The issue discussed at this meeting was the social dialogue in the countries of the West Balkan , as well as the situation with the LGBT rights in this region. The meeting was chaired by Jonut Sibijan , executive director of the Fondation for social development. Their own speeches had Lorens Meredit from the General directorate for expansion in European commission, Fransoa Zigler from the General directorate for employment of social affairs and inclusion, Boris Feis from the European confederation of syndicates and Zoel Le Derof – senior officer for politics and programs in ILGA Europe.
Concerning the situation with the LGBT rights in the countries of the West Balkan, specifically for Serbia, Montenegro and Macedonia, their own speech had Goran Miletic from the Serbian office of Civil Rights Defenders, Daniel Kalezic from Kvir Montenegro and Andonio Mihajlov representative of Subverziven Front, Skopje.
Later on, there were following discussions about the need of organizing parades of pride in the West Balkan countries, the ways in which the institution of the European Union can help LGBT community in this region, the influence of the religion over the situations with the LGBT people, as well as for the activities of the campaign “No Hate Speech Movement” organized by the Council of Europe in every country individually.
The European economic and social committee is an advisory body of the institutions of European union. The committee has developed double approach – regional and bilateral, concerning the relation with the organizations of the civil society in West Balkan. The regional approach is supported by the establishment of the Contact group for Western Balkan countries – permanent internal body of EESK, established in 2004. The main role of the Contact group is to monitor the changes in the political, economic and social situation in the countries of Western Balkan, as well as the relations between EU and Western Balkan. The bilateral approach is supported through the elaboration of several EU strategies and the establishment of the united advisory committees.  In order to achieve comprehensive approach for the region, EESK, through the Contact group, is maintain strong relation with the institutions and the bodies of EU (European commission, European parliament, Council of EU, Committee of the regions, European foundation for training) as well as with the active international organizations ( International labor office, OSCE, Regional council for cooperation) in the West Balkan countries.