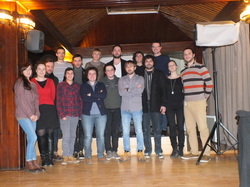 Few of the members of the NNHT.
30 January 2014
On 20 January 2014 at the GEM club in Skopje was established the National network against homophobia and transphobia (NNHT), the first and only network of civil society organisations (CSOs) and citizens, that join their efforts in combating for the rights of the LGBTI people.

The network is founded by 15 CSOs, among which are the Association for critical approach to gender and sexuality – Subversive Front Skopje, the Coalition “Sexual and health rights of marginalized communities”, the Helsinki Committee for human rights of the Republic of Macedonia, the LGBTI Support Centre, Women’s Alliance and H.E.R.A. – Association for health education and research.

The network goals are, among others, to develop a national database of homophobic and transphobic incidents and hate speech based on sexual orientation and gender identity, hate crimes based on sexual orientation and gender identity, raising the awareness of the public and the state institutions of the need of combating against homophobia and transphobia, as part of the campaign for equality and human rights for everybody, and documentation of homophobic and transphobic acts and events, and their public condemnation.

The network was established as a result of the need for a joint response to the intensified homophobic and transphobic rhetoric in the public discourse, that resulted in several attacks against the LGBTI Support centre in 2012 and 2013, violence against LGBTI activists and visible hate speech in the public realm, especially on social media.

The network establishment is a project activity of the Association for critical approach to gender and sexuality Subversive Front Skopje and is being implemented in partnership with the Coalition “Sexual and health rights of the marginalized communities”.