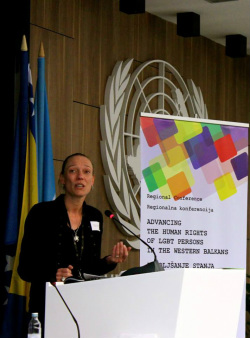 MEP Marije Cornelissen at the Conference
18.12.2013
On December 16th at the offices of the House of United Nations in Sarajevo, was held the first regional conference for LGBT rights in the West Balkan countries. Organized by the Sarajevian open center, there was a discussion on the issue “Improving the situation of the LGBT rights on the West Balkan” with representatives of the state institutions from Montenegro, BIH, Serbia and Croatia whose mandate was the issues of nondiscrimination and equal possibilities. There were also representatives from the LGBT and KVIR organizations from the same countries. Antonio Mihajlov from Subverziven Front had short speech as the only representative from Macedonia. In the first panel discussion at the conference, there was a discussion about the national mechanisms, which are working on protection of the rights for the LGBT community, where MS Jovanka Todorovic – Savovic representative from the Serbian organization for lesbian human rights – Labris has shared their experience with the difficulties they are facing every time when they try to make a collaboration with the police and the other security organs in Serbia. MR Daniel Kalezic representative from KVIR Montenegro has shared their experience in organizing the first Parade of pride in Podgorica. Also, he explained the incurred effects from the adoption of the national strategy for the rights of the LGBT community in Montenegro. Goran Selanec, representative from the office of the National Ombudsman in Croatia has emphasized how European institutions have taken an advantage over the European integration process of Croatia in order to improve the protection and promotion of the human rights for the LGBT community. Antonio Mihajlov representative of Subversiven Front from Macedonia has discussed about the difficulties they are facing in the efforts to make collaboration with the government institution in this topic. Also, he was suspicious about how the pressure of the institutions of EU in Macedonia, can help in improving the protection of the rights of the LGBT community, considering the actual political and social situation.
In the second panel discussion, the participants have shared practical experiences about the process of protection of the human rights of the LGBT community. Sanja Juras from the Croatian lesbian group Kontra has presented the lack of sensibility of the Croatian judges for LGBT issues. Marijana Lakovic – vice Ombudsman in Montenegro has presented the efforts of the Montenegrin state institution toward protection of the rights for the LGBT, as well as the experiences with collaborations with Montenegrin LGBT organizations LGBT Forum Progres and Kvir Montenegro, related to the organization of the two of the Parades of pride in Budva and Podgorica.
Between the panel discussions, Ilarija Volpe from Equinet – European network of the bodies for equality and nondiscrimination has presented the survey “ The bodies for equality, promoting equality and nondiscrimination for LGBT community”.
The final speaker of the conference was the European parliamentarian Mareje Kornelisen representative from the Green group. She emphasized the importance of associating the LGBT organizations from the Balkan in one stronger movement for protection of the human rights of the LGBT community.
This conference is a non-formal start of creating regional coalition of LGBT organizations which will unite the efforts in improving the situation of the LGBT community from the Western Balkan countries.